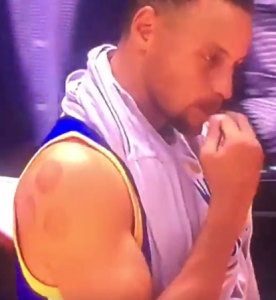 For those of us enjoying the Golden Sate Warriors’ amazing 2015-2016 season, Stephen Curry in action is a sight to behold. Not only is he a phenomenal shooter, but his looseness, quickness, self-confidence, and basketball acuity, creativity, and grace as he moves up and down the court also make him a fan favorite. He’s the second strongest player on the Warriors team, able to deadlift 400 pounds (181kg). And he has suction cup marks on his shoulder!

A lifetime of training and practice created his amazing body and skill set. What you may not know is that he takes care of himself by using medical modalities that have been practiced and developed over thousands of years. Believe it or not, Stephan Curry gets suction cup therapy!

Suction cups are a traditional therapy for many cultures, dating back to the classical medicines of Greece, Persia, and China. From a traditional Chinese perspective, suction draws stagnation out of the body and improves the circulation of qi (energy) and blood.

Here in the United States, suction cups are a primary modality with licensed acupuncturists and increasingly with physical therapists. They function as a type of reverse deep-tissue bodywork, where the skin, muscle, and fascia are pulled outward in addition to being pushed inward. As with acupuncture, micro-trauma caused by suction spurs a cascade of healing reactions that also affect and heal injured tissue.

Fascia are sleeves made of collagen protein that attach, separate, stabilize and enclose muscles and internal organs. When impacted by trauma, fascia can develop adhesions that hinder the function and mobility of muscles. Suction cups, acupuncture, and other forms of bodywork can break up these adhesions and promote healing. The pulling effect of the suction cups resets the relationship between fascia and the muscles and skin to which they attach, returning function to a healthy state.

Based on my experience, it looks like Stephen Curry has a rotary cuff issue with his left shoulder, and that he is getting treated in part with suction cups, and hence the suction cup marks. While he is right handed, an injury to his left shoulder could still affect his shooting, and may help explain why he has not been shooting as well this series.

According to Licensed Acupuncturist John Kokko, the Warriors officially hired two acupuncturists who are on the road with the team right now. If suction is strong enough or if there is a lot of stagnant superficial blood, the force can cause the kind of bruising seen on Steph Curry’s left shoulder. These are superficial bruises, similar in nature to hickeys, and take a week or so to resolve. With repeated treatment, incidences of bruising lessen as stagnant blood is drawn out and put back into circulation.

Given that Stephen Curry played relatively well in Game 1 of the NBA Finals when he had suction cup bruises, and not so well in Games 2-3 when suction cup marks were not observed, he and the Warriors may do better getting more suction cups!

UPDATE: Go Warriors—NBA Champs! Steph Curry continued to improve in games 4-6, which supportsthe thesis that he was playing injured and got better as his body healed. While the media hasn’t followed this line of thinking yet, this type of information tends to come out in the week following the finals. It was in the team’s interest to keep this information secret in order to maintain the Cleveland Cavaliers’ focused on Curry instead of other talented team members, including Andre Iguodala—the series MVP. 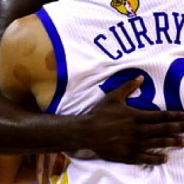